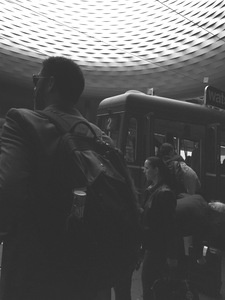 Angel Abreu (American, b.1974. Bronx, NY) is an artist, writer and educator who studied philosophy, art history and comparative literature at the University of Pennsylvania and New York University. Abreu joined Tim Rollins and Kids of Survival (K.O.S.), an artist collaborative based in the South Bronx in 1986 and has been a steadfast member working on all major works, projects and exhibitions since joining.

Rollins and K.O.S. have exhibited their work, which is based on canonical literature as well as music, in art galleries and museums internationally. Their work resides in over 120 permanent museum collections around the world including the Museum of Modern Art (MoMA), the Philadelphia Museum of Art and Tate Modern. Through his collaboration with K.O.S., Abreu was the youngest, at 14, to have a work acquired by and be listed on the artists’ roster of MoMA in New York City.

Abreu continues his work with Tim Rollins and K.O.S. despite the sudden and tragic death of its founder, Tim Rollins in 2017. The project has reinvented itself and become Studio K.O.S. under Abreu's leadership. In 2019, Studio K.O.S. had its first commercial exhibition since Rollins' passing at Lehmann Maupin Gallery in NYC. They have continued to conduct socially engaged workshops with youth and educators around the country. Abreu and Studio K.O.S. are the 2020 honorees of Art Resources Transfer (A.R.T.). Recent honorees have been Kara Walker, Roni Horn, Lawrence Weiner and Glenn Ligon.

In addition to Abreu’s work with Studio K.O.S., he continues his own painting practice based on a study of literature, music and social practice in his Hoboken NJ studio. Abreu is on faculty in both the BFA Fine Arts and MFA Art Practice departments of the School of Visual Arts in New York City. He also serves on the Education Committee of The Bronx Museum of the Arts in The Bronx, NY. Abreu is also so proud to be the 20'-21' Wallace Wilson Fellow at his alma mater Deerfield Academy in Deerfield, MA.
Loading...